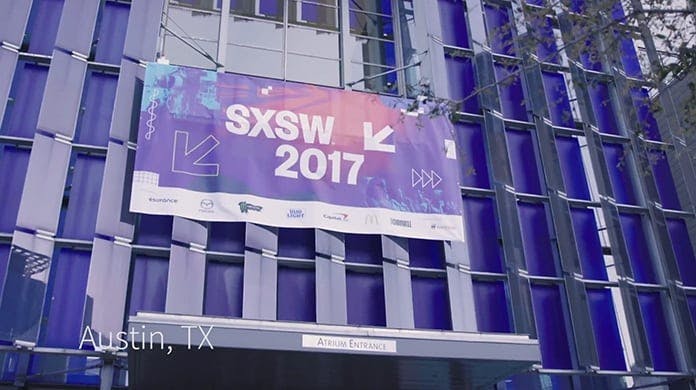 SAN CARLOS, Calif., March 13, 2017 -- Bluescape, an innovator in visual collaboration software, today announced it will be featured at the South by Southwest® (SXSW®) Conference & Festival as part of a unique virtual cinema experience created by the makers of the short film/alternative reality/virtual reality project “Wonder Buffalo.” The film’s virtual experience, as well as a recreation of how the experience itself was made, will be on display at the festival March 14th thru 16th at the JW Marriott Hotel, Salon 5, in the virtual reality (VR) gallery.

The production of Wonder Buffalo was made possible through the Entertainment Technology Center at the University of Southern California’s (ETC) 2016 Innovative Technology Award granted to filmmaker Christine Berg and writing partner Simon Shterenberg. ETC, a renowned think tank and research center within the USC School of Cinematic Arts, focuses on furthering technological advancements in the media & entertainment industry. The award provides funding and technical support to develop a short film testing R&D technologies, and designing interesting learnings and best practices for the future of production. A group of ETC member companies, including Bluescape, and a few non-member companies were the backers of this film project. In the case of Bluescape, its visual collaboration software gives creative teams a virtual workspace to meet, share, and develop ideas.

“The filmmakers of ‘Wonder Buffalo’ have created a truly immersive audience experience by capturing the characters and environment of their story so compellingly with virtual reality,” said Nick Brown, vice president of products and marketing for Bluescape. “We’re excited Bluescape could play a role in helping this creative team of filmmakers explore, experiment, and ultimately create this unique movie experience that represents a whole new way of storytelling.”

“We wanted to tell this story in a way that would help audiences relate to the main character on a more personal level than ever before,” said Berg. “Having the opportunity to experiment and push the boundaries of storytelling through the use of new technologies is incredibly exciting. We can’t wait to show other filmmakers and movie-goers at SXSW some of what’s possible.”

Founded in 1987, SXSW is known for its conference and festivals that celebrate the convergence of the interactive, film, and music industries. The event, a destination for global professionals, features sessions, showcases, screenings, exhibitions, and a variety of networking opportunities. SXSW 2017 will take place March 10-19, 2017 in Austin, Texas.

About Bluescape Bluescape helps companies create better. Its visual collaboration software gives teams a virtual workspace to meet, share, and develop ideas. Accessible wherever you are, Bluescape lets you see the whole picture as you ideate, design, and refine concepts. Founded in 2012, Bluescape is a wholly owned subsidiary of Haworth and headquartered in San Carlos, California. Visit bluescape.com.